Planning to apply for CERB?

Planning to apply for CERB? Here’s some info that might help if you’re feeling confused about the process! 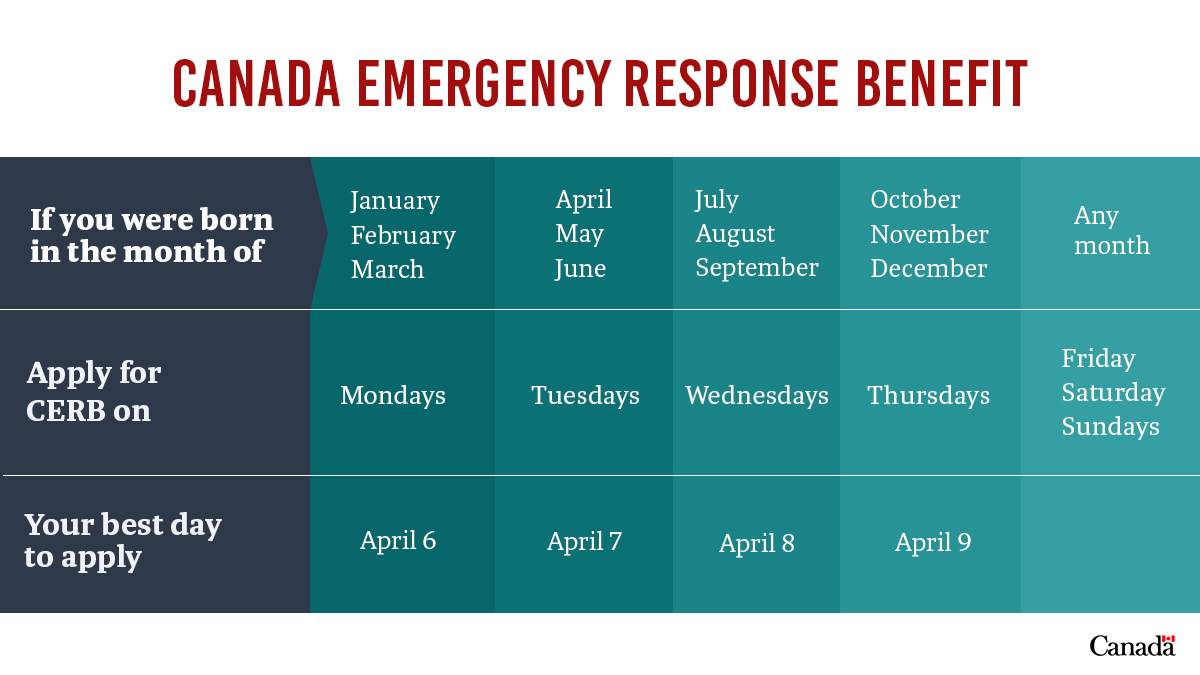 What is the Canada Emergency Response Benefit?

The Canada Emergency Response Benefit provides temporary income support to workers who have stopped working and are without employment or self-employment income for reasons related to COVID-19. The new Canada Emergency Response Benefit is paid in blocks of four weeks in the amount of $2,000, which is equivalent to $500 per week. A maximum of 16 weeks of benefits can be paid. The benefit is available from March 15, 2020, to October 3, 2020. You can apply no later than December 2, 2020.

Who Is eligible for CERB?

The benefit will be available to workers:

How to apply for CERB:

The CRA will issue payments by direct deposit or cheque, based on the payment method we have on file for you.

Service Canada anticipates a high level of applications, to help manage this, the CRA has set up specific days for you to apply. Please use the following guidelines whether you apply online or by phone.

Note: These benefits are taxable and you will need to report any payments received on next year’s tax filing. An information slip will be made available for the 2020 tax year in My Account under Tax Information Slips (T4 and more).

Hope that helps! If anyone is looking for full lists of financial supports available, these two links are great:

What is an RRSP?

A registered retirement savings plan (RRSP) allows savings for retirement to grow tax free in a special plan registered with the Canadian government. RRSPs are a key part of retirement planning because of the tax advantages they offer. But you need to know the rules to get the most mileage out of RRSPs and avoid tax penalties.

You can contribute to your RRSP up to December 31 of the year you turn 71. Also, by December 31 of that year, you must convert to a registered retirement income fund (RRIF) or purchase an annuity to avoid having the value of your RRSP fully taxed in the year. Since there are tax and other implications to consider, an advisor can help you determine the best option for you based on your personal situation.

This information is a guideline only and is current as of the publication date. This information is not intended to provide specific financial, tax, investment, legal or accounting advice. For further details, visit the CRA website.

You report B.C. income tax to the Canada Revenue Agency (CRA) as part of your federal income tax return.

If you were a B.C. resident on the last day of the tax year, or you earned income in B.C. during the year, you may have to pay B.C. income tax.

Forms to calculate your B.C. income tax are included with the federal T1 Income Tax Return.

You may have to file an income tax return even if you don’t owe any income tax; for example, the CRA may send you a request to file a return.

Even if you don’t have to, you may want to file a return if any of the following situations apply:

Generally, tax returns must be filed on or before April 30.  The CRA may charge interest and a late-filing penalty on returns filed after the due date.

If you or your spouse or common-law partner carried on a business in the tax year (other than a business whose expenditures are primarily in connection with a tax shelter), your return has to be filed on or before June 15.  However, if you have a balance owing, you still have to pay the tax on or before April 30.

B.C. personal income tax rates apply to specific tax brackets. A tax bracket is a range of annual income. Income past a certain point is taxed at a higher rate. The tax brackets are indexed each year to the Consumer Price Index for B.C. (BC CPI).

For the 2016 tax year, the tax brackets were increased from the previous year by a BC CPI rate of 0.9%.

B.C. Premier Christy Clark has promised to change Medical Services Plan premiums — which she described as unfair — before next May’s provincial election.

But Clark would not provide any specific details on how she plans to change the health tax, which brings in $2.4 billion to provincial coffers each year.

“One of the proposals has been, ‘Let’s take MSP and put it in the tax system,'” Clark said in a year-end interview with CBC.

“It moves one tax from here over to here. Well, I don’t think that is what people say when they want to get rid of MSP,” said Clark. 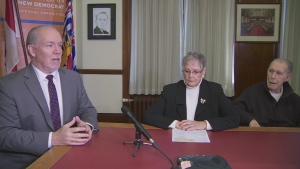 NDP leader John Horgan, and a senior couple, Sandra and Gordon Carmichael, are pictured at a press conference about MSP increases on Wednesday, Dec. 12, 2016. (CBC)

“They want us to trust them to be able to spend their money better than government can. And I agree with that.

“I would say there are a lot of taxes I want to get rid of because I think we should be figuring out how to get more money back into people’s pockets.”

The MSP changes are expected to be announced in the 2017 provincial budget next February so they can be introduced three months before the election.

Major changes in the MSP premium plan have been building for nearly a year as the province tinkered with changes to monthly payments.

The province also increased the rates for more than 500,000 British Columbians.

A senior, or senior couple, who earn more than $51,000 combined, or an individual or couple who make more than $43,000 have seen their bills rise by about $14 a month. Those bills have arrived in peoples’ mailboxes this month.

The B.C. NDP has also vowed to make changes to MSP. Leader John Horgan will reveal his plans for the premiums following the provincial budget in February.

Horgan says it is hard for British Columbians to trust the Liberals considering the government has increased the rates by four per cent a year every year since 2008.

“They are doing away with the couple rate and they are imposing an additional cost of couples without children,” said Horgan.

“When we get inundated with feel good Christy-Clark-is-doing-right-by-you ads that you are paying for, remember the 500,000 other couples that are paying more as Christy Clark pretends others are paying less.”

Clark’s government is also considering changes to who pays the province’s property transfer tax. That tax has been described by some as a cash grab by the government, which adds additional costs to the purchase of homes.

Asked whether she intended to get rid of the unpopular tax, she replied, “That’s not part of the agenda at the moment.”

But she did open the door for changes down the road.

Currently the government offers the First Time Home Buyers’ Exemption that provides a discount to the tax for homes valued at less than $500,000.

She said the government would like to reduce the number of home buyers who have to pay the property transfer tax.

“If we were going to start thinking about next steps on that, we would probably do more on where we are, which is creeping up the numbers of home buyers that don’t have to pay the property transfer tax at all,” said Clark.

Clark mentioned during a speech to the Surrey Board of Trade on Feb. 19, 2015 that the tax could be reduced or eliminated some time in the next few years — but not before the provincial debt is under control.

In September, Finance Minister Mike de Jong provide forecasted the property transfer tax will bring $2.2 billion into the treasury this year, up from the $1.2 billion predicted in the budget introduced in February.

Expect to pay more for electricity, public transit and car insurance in the 2017 in BC

British Columbians can expect to pay more for electricity, public transit and car insurance in the new year.

ICBC, BC Hydro and Translink are all bumping their rates in 2017, and Medical Services Plan (MSP) premiums will rise for more than half a million West Coasters as well.

Premier Christy Clark says she’s considering rejigging the way B.C.ers are taxed, including changing MSP and property taxes, but nothing concrete is in the works yet.

Here are some of the services British Columbians will, or could, be shelling out more for in 2017.

Approximately 530,000 families in B.C. will see an MSP increase next year, according to NDP leader John Horgan.

The median total income for a family in B.C. is $76,770, according to Statistics Canada.

Senior couples who make over $51,000 will also see a bigger bill, landing in the highest price bracket without a chance at a discount.

There are some breaks for single parents who make less than $40,000 a year — they could save up to $1,248 annually, or $104 every month. Single parents with two kids could keep at least $900 in their pockets each year.

The provincial government said the new MSP rates are meant to give low-income families a break.

The increase means the average monthly residential bill will go up by about $3.74.

The new rates are to help update BC Hydro’s aging infrastructure and enable the corporation to keep up with the ever-growing need for power.

The demand for electricity hit a three-year provincial high on Friday in the midst of a two-week cold snap on the South Coast. 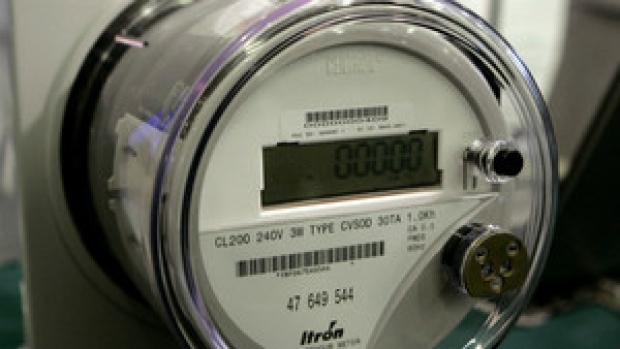 BC Hydro rates are going up by more than 3 per cent next April.

​Rates for basic insurance with ICBC are going by 4.9 per cent in the new year.

ICBC had been eyeing the 4.9 per cent rate increase for months, saying the extra boost would help cover costs caused by a higher number of claims in the province.

Stone has also previously announced plans to double premiums for owners of high-value luxury vehicles in the new year.

​Translink will be increasing fares for the first time in four years in July 2017. Prices will rise by $0.10 for single-use tickets and $2 for monthly passes.

The average Metro Vancouver homeowner will also see an additional $3 on their property taxes next year to go to the authority.

The changes are part of a new three-year, 10-phase plan to improve transit in Metro Vancouver. 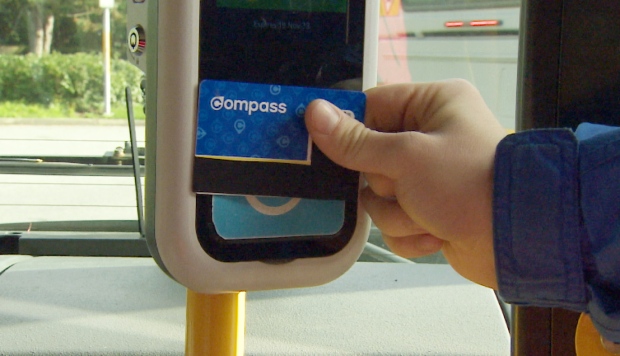 TransLink commuters can expect to pay an extra $0.10 for single-use passes and an another $2 for monthly passes next year. (CBC)

BC Ferries’ fares are expected to rise by 1.9 per cent, keeping in line with its annual pricing caps set out in 2015.

Vancouver city council approved a 3.9 per cent property tax increase for 2017, including a 0.5 per cent increase to help fight the fentanyl crisis.

The latter portion of the levy will cost homeowners anywhere between $4 and $19 a year, depending on the value of their home.

Vancouver homes that aren’t principal residences or aren’t rented out for at least half the year will be subject to an empty homes tax next year.

The one per cent tax is the first of its kind in the country, and means a $5-million home left empty would be taxed $50,000.

With files from the Canadian Press